In honor of the 100th Anniversary of our city's founding by George E. Sebring in 1912, all Sebring Police Department uniformed personnel will proudly wear the "Centennial Shoulder Patch", which was designed from the city's official centennial logo. The city's "Official Centennial Logo" has been affixed to the rear roof pillar of each of our patrol cars during the year-long celebration of our city's birthday. A project is currently underway to compile a historic timeline of the SPD, complimenting a pictorial display of the 18 Town Marshals and Police Chiefs who have served our city over the past 100 years. 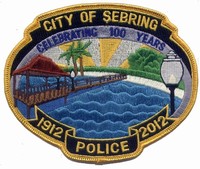 Other vintage artifacts will also be on display in the lobby of our police station. We also hope to hold an open house sometime during 2012 to mark our participation in this once-in-a-lifetime event. The "icing on the cake" will be the issuance of a Centennial Badge, which will be worn by all Sebring Police Officers. The centennial badges were funded through the generosity of the Wal-Mart Corporation.

We worked diligently to design a special commemorative badge that will appropriately honor the officers and the city that we proudly serve. 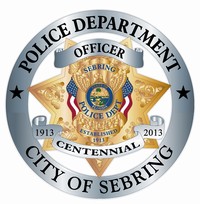 2013 marked the Sebring Police Department's 100th Anniversary.  Within 12 months of our city's founding, the City of Sebring was chartered by the State of Florida, and its police department was born with the appointment of the city's first town marshal, Aaron Withers in 1913.

The 40 law enforcement professionals who represent "Florida's Finest" are proud to have this opportunity to celebrate the 100th Anniversary of our great city.